Two Pieces of Net Art to Get You Going

The internet was never developed with art in mind. It started in the late 60s as a tool of the US Department of Defense (ARPANET). Its next major turning point was 1989 when the World Wide Web (along with HTML, URLs, HTTP and the notion of a web browser) was invented by Tim Berners-Lee during his time at CERN.

The ’90s saw the development of the first publicly available web browsers and the doors were thrown wide open. While some artists had already been working with networked technologies prior to the invention of web-browsers, it was during this period that communities of artists began to more formally coalesce under the banner of net art. 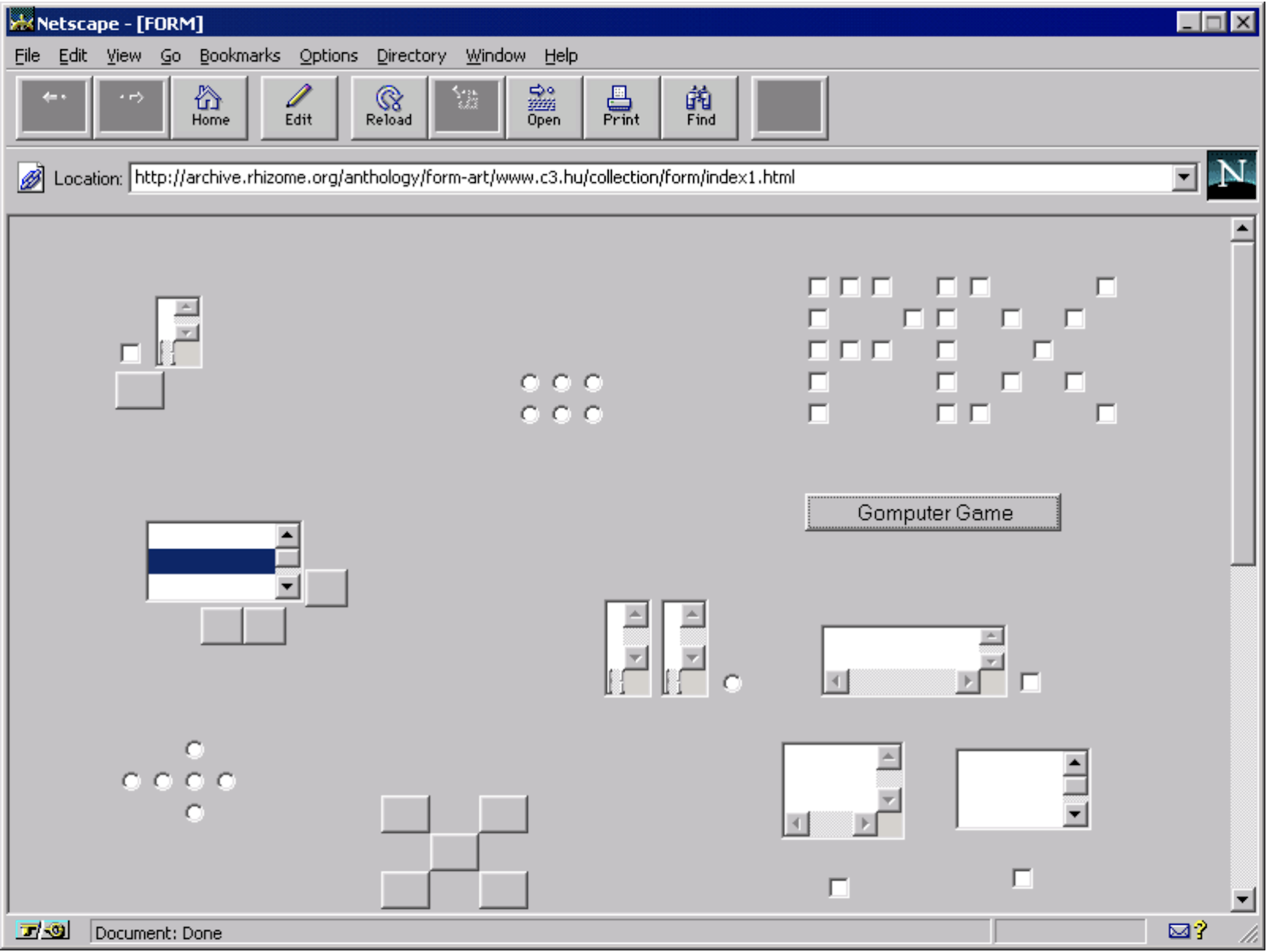 Over the past couple years I’ve been devouring everything on Rhizome.org’s Net Art Anthology, which, if you haven’t already checked it out, is an incredible resource. It collects works from 1982 to 2017, in many cases carefully reconstructing them and emulating them in older browsers so they can be experienced as when they were first made. Altogether, the whole collection is an impressive achievement of anthologizing, but my favorite pocket of works are those made for the first web browsers of the 90s, well before the invention of smartphones and the Web 2.0 turn to apps. Screenshot from mouchette.org (1996) by Martine Neddam

In part, I feel nostalgic for the simplicity of the HTML, and the aesthetic shaped by the limited fonts and visual elements that were available to artists using HTML at the time. But I also feel that these early works beautifully encapsulate one of net art’s most consistent themes. Namely, the paradoxical feeling of simultaneously being so intimate with and so distant from a love of some sort. 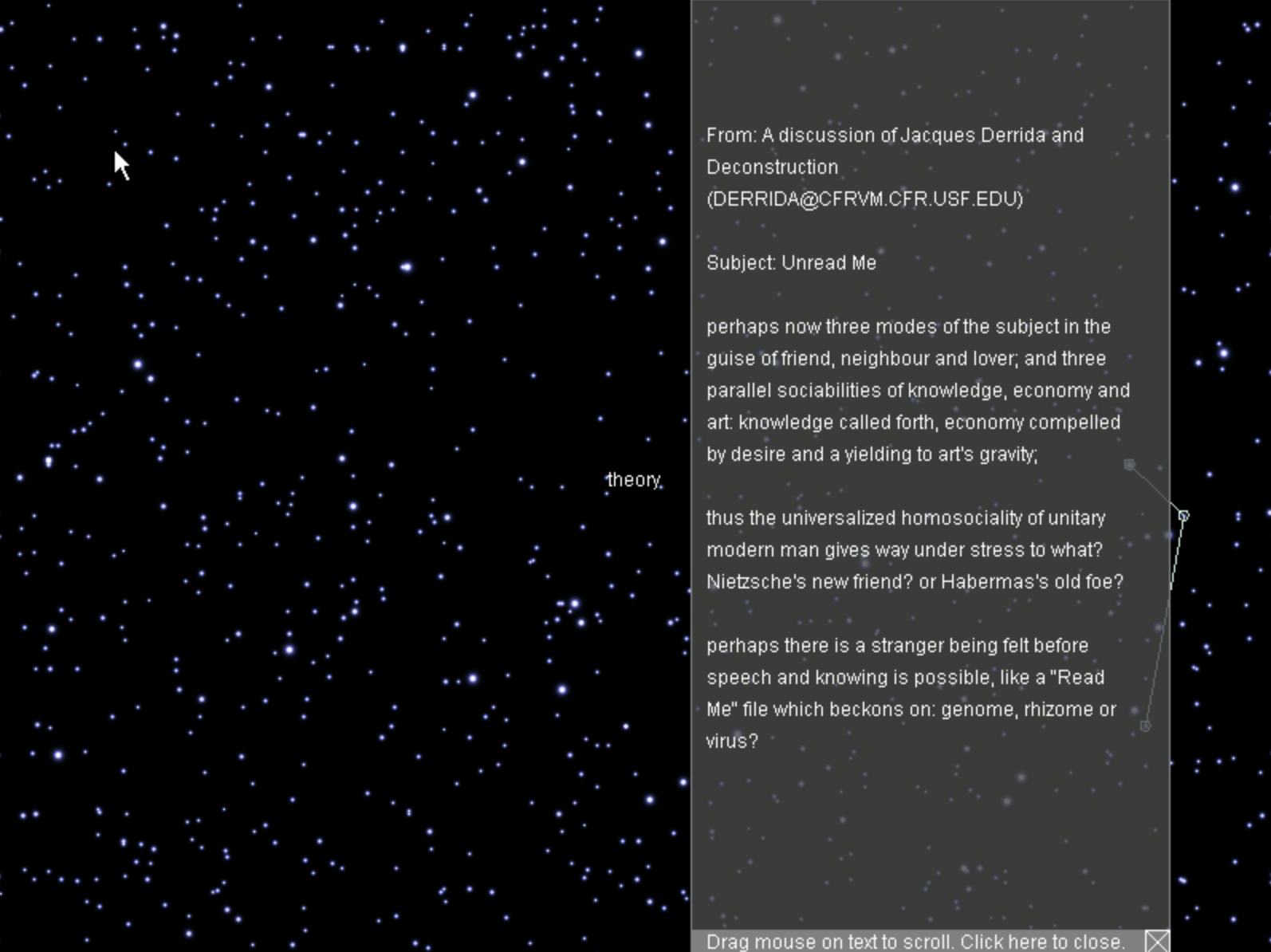 As a way to introduce this pocket of 90s net art, I’d like to briefly introduce you to two pieces. My Boyfriend Came Back From The War (1996) by Olia Lialina; and skinonskinonskin (1999) by entropy8zuper! 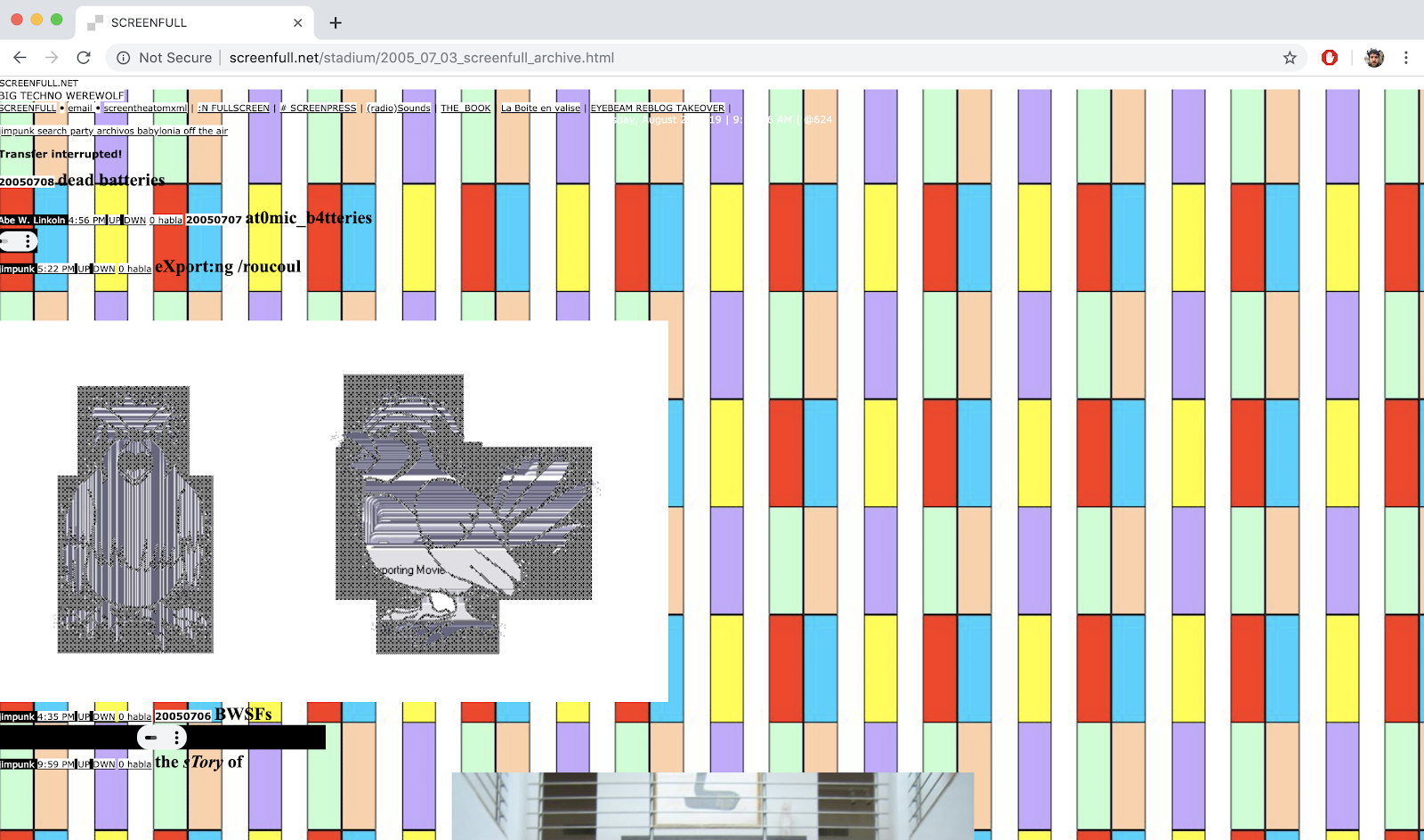 Both these pieces tell the story of being away from a loved one. My Boyfriend Came Back From The War is fictional. skinonskinonskin, on the other hand, is an epistolary series of website love letters exchanged between two artists. 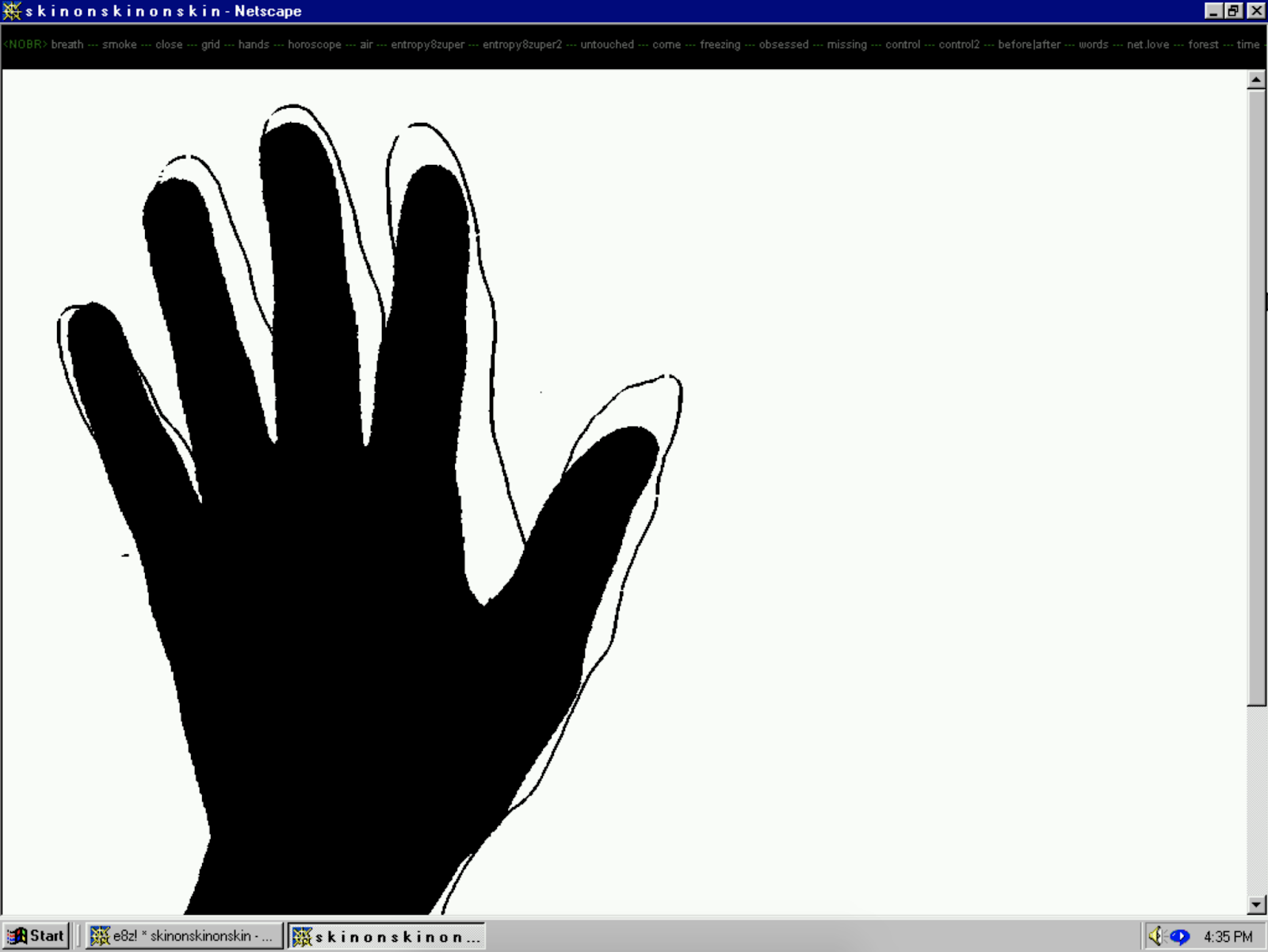 The subtitle to skinonskinonskin is “A DHTMLove affair by Entropy8 and Zuper!” And indeed, the work is a series of pages exchanged between two people, Auriea Harvey and Michaël Samyn, at the beginning of a romance. The pages were private at first, then locked behind a paywall, and now thanks to Rhizome’s Net Art Anthology can be visited for free.

To view the piece in an emulated Netscape browser go here. Desktop viewing is strongly recommended. The interactivity of the work invites the viewer into the romance. In many of the pages, the position of the mouse affects what’s going on screen. These are love letters that unfold the more they are touched. And insofar as the mouse is always on the screen they cannot help but be touched. 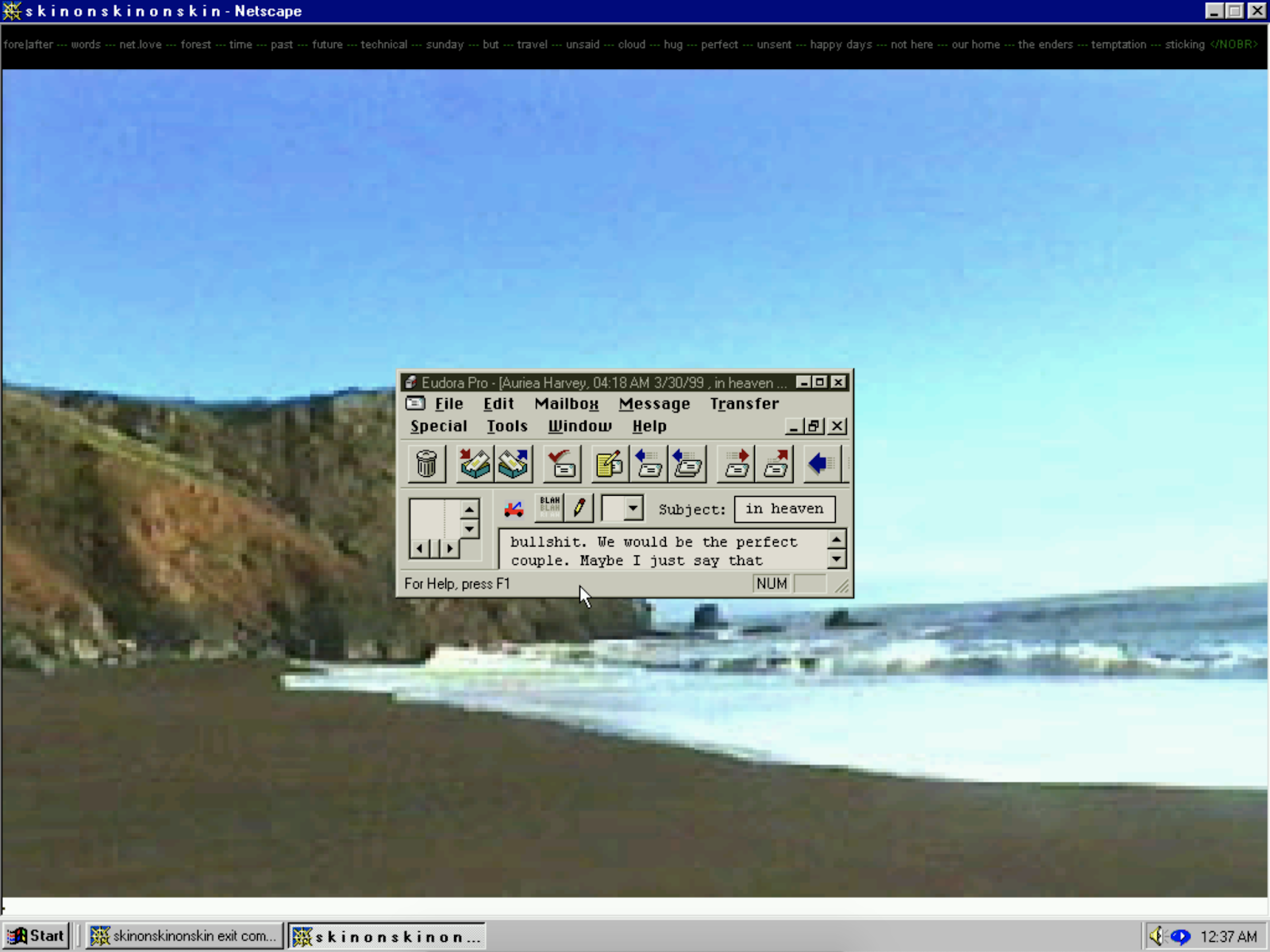 My Boyfriend Came Back From The War is interactive in a different way. You don't touch it as you make decisions on how to progress through it. The piece makes use of the <iframe> tag in HTML. This tag lets you open a new webpage within a frame that you place on-screen. For example, in the image below there are four frames displaying four different pages. 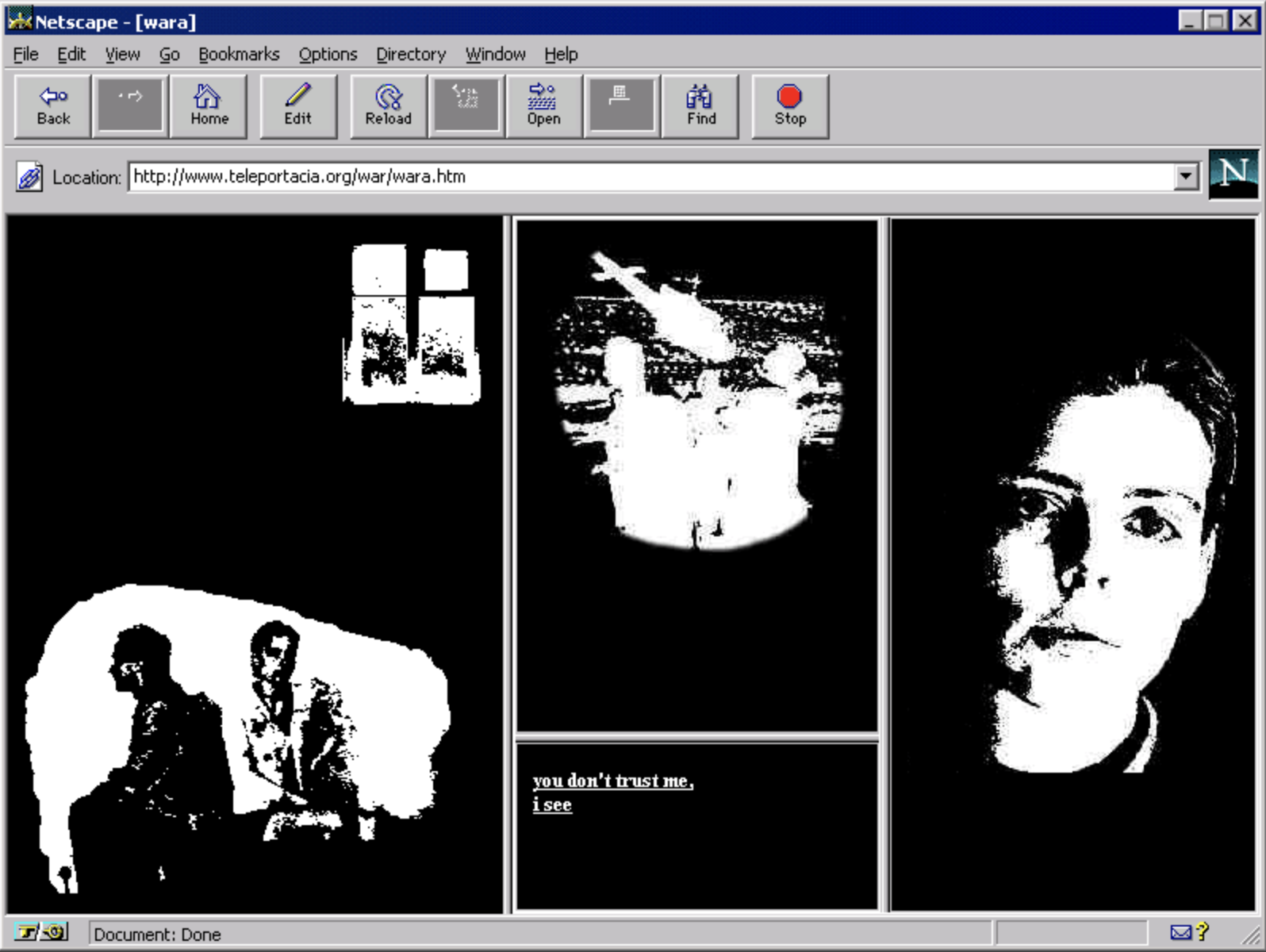 Screenshot of My Boyfriend Came Back from the War (1996) by Olia Linalia. Hosted here on Rhizome’s Net Art Anthology.

The story begins as a single page. However, as it progresses the page becomes increasingly bisected as new iframes appear until it comes to represent window panes of a sort. As if the act of viewing was the act of peering into another’s home. 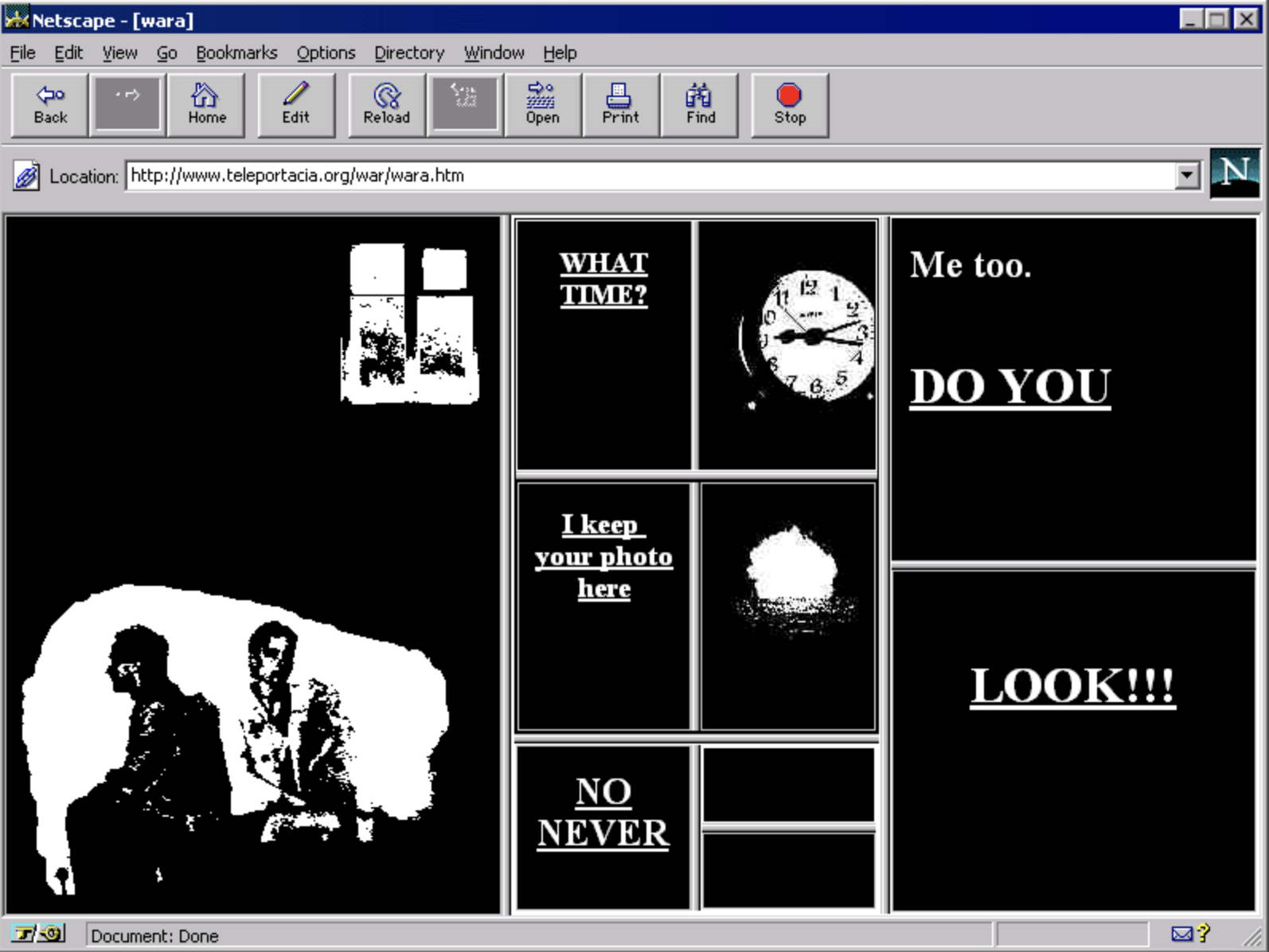 Screenshot of My Boyfriend Came Back from the War (1996) by Olia Linalia. Hosted here on Rhizome’s Net Art Anthology.

My Boyfriend Came Back from the War tells the story of a young couple reunited. It is a tragedy. As you click through you observe the couple’s attempt to recalibrate their love in the shadow of the trauma the young man has experienced in war. The couple remembers things differently. 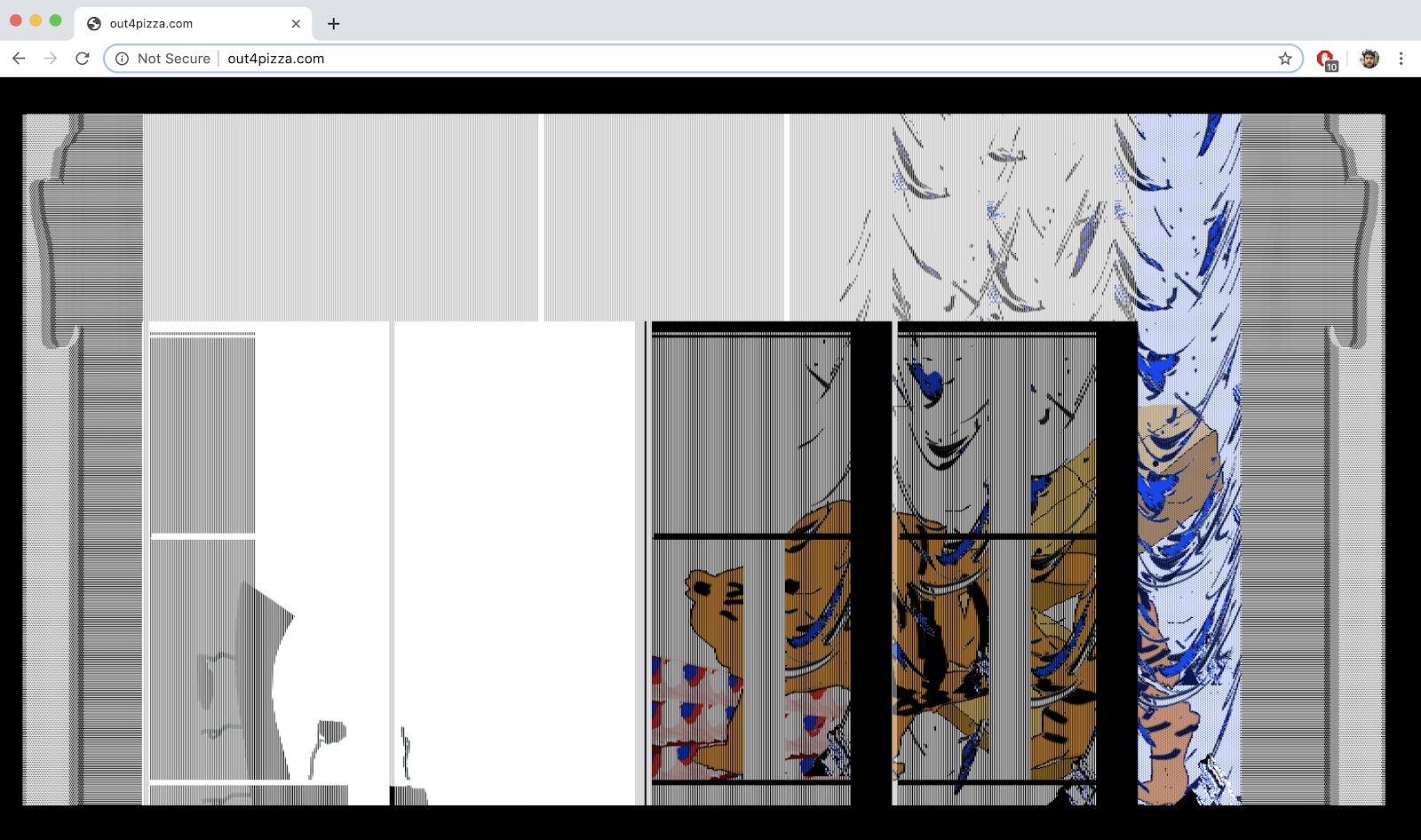 Screenshot of out4pizza.com (2007) by Laura Brothers.

Of course, net art evades easy definition. A quick browse of #netart on Instagram features a hearty crop of images that seem to be more concerned with a kind of techno-dystopia-cyberpunkish-anime-futurism than with an investigation and manipulation of the underlying technology of the net. But #netart Instagram images and the net art websites of the 90s do share an interest in exchanging art freely across vast distances without the help of more traditional venues such as museums and galleries. The aesthetic concerns of different net art practices might vary wildly. But their mutual interest in sharing experiences freely on the internet remains strong.

The internet was not made with art in mind. But what I find so compelling about these early works of net art and the artists who made them is their sense of hospitality. They take the language of the net into their own hands and make space online where previously there was none. A space in which we can gather and reflect on what it means to live in and among the networked world we share together, apart.

Anyway, here’s yet another hyperlink to Rhizome’s Net Art Anthology. It’s beautiful. Go check it out.